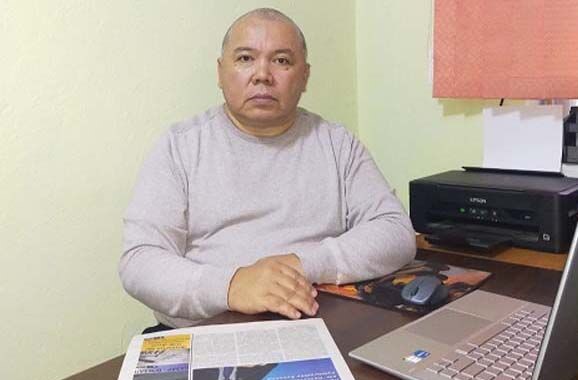 New York, January 25, 2022 – Kazakh authorities must continue their investigation into the attempted murder of journalist Amangeldy Batyrbekov and ensure that all those responsible are held accountable, the Committee to Protect Journalists said on Tuesday.

At around 11 p.m. on January 3, in the central town of Saryagash, an unidentified man tried to break into the office of the daily S-Inform, where Batyrbekov works as an editor, according to the journalist, who spoke to CPJ in a phone interview, as well as reporting and Kazakh independent free speech group Adil Soz.

When Batyrbekov’s son, Dinmuhammad Batyrbekov, a lawyer at the newspaper, closed the office, the man fired a shotgun blast through the glass door, hitting Dinmuhammad in the shoulder and back, Batyrbekov said, adding that the The assailant then fled.

The reporter said his son survived the attack, underwent surgery and was hospitalized for 10 days.

On Jan. 19, police arrested five people, including two men who were allegedly hired to carry out the murder, two attack coordinators and the alleged mastermind, according to a Jan. 21 police statement, media and Batyrbekov.

“Kazakh law enforcement should be applauded for quickly arresting the suspects involved in the attempted murder of journalist Amangeldy Batyrbekov,” said Gulnoza Said, CPJ’s Europe and Central Asia Program Coordinator. “Authorities must now ensure that everyone involved in the attack is held to account and that crimes against members of the press are taken seriously.”

Batyrbekov told CPJ that two men arrived at his home earlier in the evening of January 3 to ask where he was and that his daughter told them he was at S-Inform’s Office. He said he believed one of these men later shot Dinmuhammad, and the other was the driver of the getaway.

Police told Batyrbekov that the assailant “admitted that after the shooting he texted the man who hired him ‘Done’ because he thought he killed me,” said the journalist. “He didn’t know I was working with my son, and he shot my son, not me.”

Among the men arrested was the alleged organizer, the head of the Saryagash education department, Bauyrzhan Mairikhov, according to a report by the US Congress-funded television station Radio Free Europe/Radio Liberty.

In November, Batyrbekov published a report in his newspaper, and posted on Facebook, about allegations of corruption at a local kindergarten, which implicated Mairikhov in wrongdoing. Batyrbekov said he believed the attack was retaliation for this reporting and added that after announcing the investigation in November he received several phone calls from strangers asking him not to publish the report.

Authorities accuse Mairikhov of paying 5 million tenge ($11,440) for the murder; 500,000 tenge ($1,144) to each attacker and the rest to the two coordinators, according to RFE/RL, Batyrbekov and the police statement. These sources do not identify the other suspects by name.

CPJ called Mairikhov for comment, but his phone was off. CPJ also called the Turkestan Regional Police Department, which oversees police in Saryagash, but no one answered.

In September 2019, Batyrbekov was sentenced to two years and three months in prison for insult and defamation for his reporting on corruption in the local education department, as CPJ documented at the time. He was released after winning his appeal in January 2020.